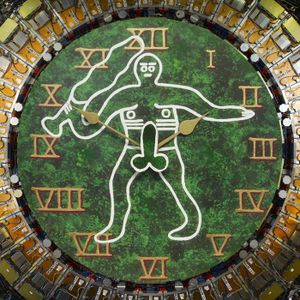 …In Which our 69 intrepid pilgrims meet inside the large hard-on of the CERNE ABBAS chalk giant’s giant protuberance to begin their journey to the large hadron, where through a combination of ritual magic, the off the charts luck of True Fools, and sheer VIM we are to DO THE DANCE, Immanantise The Eschaton, and usher in the Age of GRUMMET.

On the way we will visit the community at DAMANHUR, the keepers of the Temples Of Humankind, an underground temple complex 9 times bigger than St. Paul’s and built in total secrecy in the heart of a mountain in northern Italy between the 50’s and 90’s. There we are to learn to dance the phrase “show us so we can understand” translated into the magical dance language of the Damanhurians, which we will then ritually perform on the 23rd of April inside the giant orifice of the Large Hadron Collider at CERN. Don’t worry, the power is off, we will not be dancing into a black hole. An alternate universe maybe.

ANYWAY: here is some music

nice version of the praying

what is this sorcery?

Jodorowsky, Heathcote and BB on a magical mystery tour love it.

Glad to be of service :)