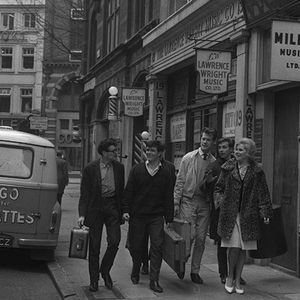 The History of Tin Pan Alley/Denmark St through music made in the wake of forthcoming developments within the street. 1st transmitted on the 24th of June at 14.00 on Resonance fm 104.4 London on the show Wanted. 100 years ago Denmark Street became the home of sheet music publishing. Soon agents and managers carved their niche there, too. Guitar shops opened along both sides, while drum and keyboard shops followed. Soon number 4 became Regent Sound Studios and number 10 Central Sound. The Rolling Stones, The Kinks, The Who, and Black Sabbath recorded at the former, while Donovan and David Bowie taped at the latter. The Giaconda cafe became the beatniks bar of choice. Martin & Coulter penned two UK eurovision hits there while Cook & Greenaway wrote a plethora of 60's UK Top 1o's. In 1992 The Forge at 27 became The 12 Bar Club where, Jeff Buckley, Seasick Steve, Keane, Katie Melua, and Adele all made their debuts. [Inset: Ronnie Golden @ The 12 Bar on 11.02.14 @ The Resonance fm Benefit]

I guess I was a bit privileged to live not far away from Tin Pan Alley in London in the early 80s when I had a residency at the Rock Garden as DJ there. I was actually living in Whitfield street from 1981, right on the crossroad with Goodge street near the famous CBS Recording Studio !!! So, my daily routine on the way to Rock Garden in Covent Garden from there was to walk down Tottenham Court Road, cross Oxford st at the Centre Point, and here we go, I was in the realm of Denmark place and Denmark Street! There, I could only gaze at beautiful keyboards selection at Rod Argent shop and the other shops( didn't I know then that I would get some of these wonderful keyboards only 4 years later ?). Oh boy, what a dream come true story it could be? And then on the other side near the Le Gioconda cafe where I usually crossed the Denmark street there, one day, you could just hear that David ( Bowie ) is back from Berlin in force, reinventing himself again, by revisiting the old places ( places from Ziggy time too). Well, by that time, in the early 80s he was also inspired by New Romantics and also started revisiting not just places but even his much earlier old song from the "Space Oddity" in his new creation - 'Ashes to Ashes' in 1980 !!! ... How more nostalgic it could get!!! Ha-ha, the legacy of the old good Major Tom will live forever, I guess!!! Good times, amazing friends, great memories of the place. BTW, I quite recently reconnected with Anthony Macari. Some of you might remember the Tone Bender's fame associated with that name and Macari's shop!!! Also, I had a great chat with Crispin Weir at the Regent Sound Studio, to refresh some memories of the past. That was a year or so ago!!! That proved, that very kind and nice people are still there!!! And it should stay that way!!! And last not least, a well-known luthier, Tim Marten, who now had moved nearby, not far away from Denmark St though was very kind to me too, when I asked him about the Andy's and other places in the street that I vaguely remembered!!! Things became more clear to me as I don't remember everything. But what is absolutely clear, that the legacy of the British 'Tin Pan Alley' will never die, indeed!!!

Was a Denmark Street employee myself in the 80's with Rose Morris working the Acoustic Dept as well as in the Electric Guitars on the ground floor. Was a great job, loved it every day, and have some great memories to boot. Live long friends were made and I can't complain about that!

PLEASE CLICK THE REPOST ICON NEXT TO THE HEART SYMBOL