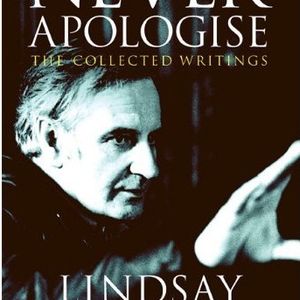 This exclusive interview with ANDERSON's biographer PAUL RYAN was
first transmitted on Resonance fm 104.4 London on 30.01.11. at 3pm.
ANDERSON was one of Britain's true iconoclasts. His British
feature films were radical, witty, and utterly involving. He was described
by Time Out in 1982 as 'Britain's Luis Bunuel'; loathed by the New Yorker
Magazine's Pauline Kael, but treasured by those with a sense of humour such
as Monty Python's Michael Palin. Paul and I discuss his best feature films:-
THIS SPORTING LIFE (1963), 'IF....' (1968), which launched the career of Malcolm
McDowall, 'O LUCKY MAN!, 'BRITANNIA HOSPITAL' (1982) and BBC TV's 'IS
THAT ALL THERE IS?' (1992/1994). 'NEVER APOLOGISE - THE COLLECTED WRITINGS OF LINDSAY ANDERSON by PAUL RYAN is available on PLEXUS BOOKS in good book shops, and online.PAUL RYAN discusses the man he knew, and the collected writings of Lindsay Anderson whom he interviewed many times.Henry Scott-Irvine Presenter/Produ​cer

John P Lynch
·Replying to
Fantastically compiled and interesting. Paul Ryan has a great voice. Many thanks for posting.

An extended version of this show resides here too https://www.mixcloud.com/Resonance/henry-scott-irvine-presents-18th-february-2020/