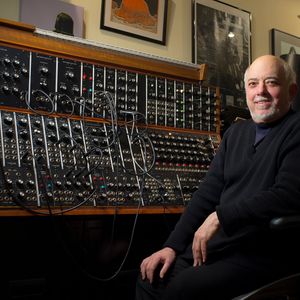 This was Craig's first visit to Wanted on Resonance Fm 104.4 fm London on May 13th 2014. As an Engineer-Producer-Composer he has worked with some the finest names in music. Early on he worked with Blondie and in particular on their 1976 single X Offender. He also was behind The Ramones début disc as well as Richard Hell's Blank Generation EP (issued in the UK by Stiff Records) as well as Power Pop legends The Records. He co-produced Suicide's eponymous début for Red Star Records and Bjork's 1st band The Sugarcubes. He has produced Arthur Brown, The Fall, Luciano Pavarotti, and Cassell Webb, too. Immersed in Electronica, he is - in many folk's estimation - one of the leading exponents of the genre. Recent live performances of his 1979 album Nommos have taken place to great acclaim. Henry Scott-Irvine Producer-Presenter. (Craig's 2015 appearance is here https://www.mixcloud.com/Resonance/in-conversation-with-henry-scott-irvine-29th-october-2015/ CLICK THE REPOST ICON NEXT TO THE HEART

Craig Leon on Bowie after he died https://www.mixcloud.com/Resonance/in-conversation-with-henry-scott-irvine-14th-january-2016-craig-leon-on-david-bowie/

Looking forward to it...as well as listening to your backlog of broadcasts.
How about a show with who I consider the true Godfather of Punk...Lenny Kaye!!!!
No Nuggets. .. no Punk!

Well Lenny would be a pleasure ... Yes .. if i can get him next time Patti is in London. Adding 2 shows a day from my archive of transmissions. Do add to the listens by hitting the repost icon above

Craig's memories of the NY music scene are probably the most concise and entertaining of any I've heard or read so far....

Cheers. Do add to the listens by hitting the repost icon above