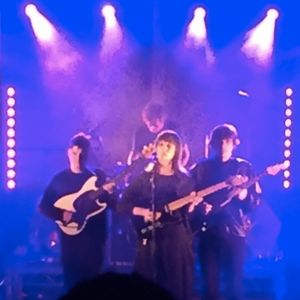 HDIF Podcast #46by How Does It Feel To Be Loved?

It's been another wonderful summer, full of festivals and fun, and here's a round up of my highlights of the summer, with brand new discoveries from Indietracks and End Of The Road, alongside tracks by old favourites , and a clutch of songs that I played when I was guest DJ at London's Des Was A Bowie Fan club night. There's two tracks apiece from the magnificent Cate Le Bon (who was a stunning headliner at Indietracks) and The Burning Hell (whole stole the show and our hearts at EOTR), plus a song by an amazing band with a confusing name, Rolling Blackouts Coastal Fever. Elsewhere, there's festival highs from Deerhoof, King Khan, the Mary Chain and more, plus those random joys from DWABF courtesy of Laura Nyro, Oh Sees, and Paris Angels. Oh, and "25 Or 6 To 4" by Chicago which I played at roughly 3.35am at the silent disco at EOTR!

The next HDIF is on Sat September 16th at The Phoenix, Cavendish Sq, London W1, with DJ David of Comet Gain. More info http://www.howdoesitfeel.co.uk

Brilliant as ever! Thank you for the Chicago song, what a great moment it was.
I've made a vaguely related one...

Thank you! Were you at EOTR? I've no idea how the song went down, it being a silent disco. I heard a few people singing along, but unless a song turns out to be a huge singalong it's hard to tell how it's being received. I hope it was a moment.

Discovering new music that I actually like is difficult. Radio all sounds the same, and is often quite dull. Since I came across HDIF a few weeks ago, it opened up a new collection of really good goodies! A lot of new music to check! Thanks!!

My all time favourite mix is also on mixcloud ( https://www.mixcloud.com/BBCEssentialMix/air-essential-mix-part-1-08031998/ ). Maybe also nice for you to discover.

A very nice compilation
Thank you