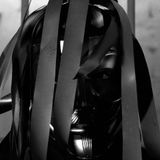 1995: Harry Elektron was “born” on summer of this year, when he first encountered with a cassette tape of Rebetiko Songs (kind of early 20th century Greek folk-underground music) and decided to transform some of them through an experimental avant-garde industrial prism. The result was released by LYRA records (Athens, 1999) under the title “Ιερόδουλος Σοβαρή Στην Δίκη” (Prostitute Serious At Court Trial). Several gigs were done during those years (MYLOS, Myrovolos, Thessaloniki)

2000: Involved with theatre as an actor and in 2002 becomes a host of “Περίπτερο” (Kiosk), a TV serial-magazine on the Greek National TV station (ET3) and at the same time composes the music for the movie “Μαμούνι Με Τσίπουρο” (Shrimp With Tsipouro), both of them of the same director and friend, Loucas Kouchtin.

2002: About to make his first band with two friends: Harry Eschaton on guitar and Nick Vibraphone (later Nick Brave) on trumpet & keys. On 11th of January 2003 they appear as the support band on ADD N