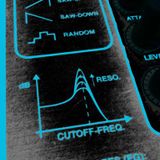 Hagen Schnitzel discovered the world of electronic music in 1995 when he saw a broadcast of a big Techno-Event on TV. He started by mixing vinyls but soon he gets the feeling, that a DJ indeed controls the mix of the sound, but has no control over the sound itself. In 1997 he bought his first Synthesizer (a cheap but extremely powerful Doepfer MS-404), followed by a 808/909-clone and an early Cubase. Now, everything what is needed for producing the first own tracks, was there. In the following years, tons of equipment has been bought. Some nice sounding tracks but a lot more terrible sounds were created, while he developed his producing-skills. Slowly but steady his producing-skills were growing and finally he gets a degree as sound engineer. In our days he plays a couple of live-gigs per year and is still producing techno.