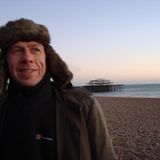 Never miss another
show from groovedigger

Got seriously into music by listening to John Peel in the 80's. I'm sure any other Peel fans out with there will have a similalrly diverse taste in music, but growing up in Oxford I flitted between gigs such as The Cult, Culture, Club and the Smiths to The Wee Papa Girl Rappers.

My 80's highlights were Duran Duran at Wembley Arena and Simple Minds at Milton Keynes bowl.

I made a highly illogical transition from goth to raver when I discovered Chris Forbes' Dawn Raid acid house show on Capital FM in 89. By 91 I had a DJ residency at Prism in Oxford.

I fled Oxford in 94 starting my own night In2Deep at the Joint and Escape clubs in Brighton. Playing US House and Garage and the cream of the UK stuff we had a good regular crowd but the initiative and money ran out in one last drive for a classic night when Paul Trouble Anderson played for me at the Escape on a Tuesday night. It was great.