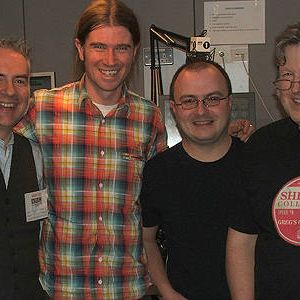 It's Ten Years since The Shellac Collective did a show with Rob da Bank playing some of our 78s on Radio 1. Present in the studio that day were Rob da Bank, Greg Butler, DJ 78, Theo Shellac, Darren Harte, Tim Hellzapoppin, Lewis Durham and special guest Alex James, with two discs courtesy of Natty Bo in the last part of the programme.

The show starts off with Greg playing a wax cylinder from 1908 - at the time the oldest record to be played on Radio 1 - but persevere because the show gets better from then on....!