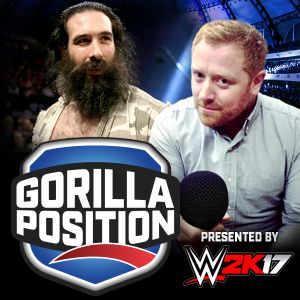 This week on Gorilla Position, you voted for it, so here it is… James Delow’s exclusive interview from New York City with the one and only Luke Harper! In a rare appearance, the former Wyatt family member talks his new singles run in WWE, his thoughts on being away from the Wyatt stable, how he’s ready for a main event push, his love of wrestling as a kid, his career, and what makes the fans connect to the Luke Harper character.

Elsewhere on the show, James is once again joined by Ash Rose, Skillit and Matt Davies to chat through the highs and lows of this week’s WWE TV. How are the storylines coming together ahead of WrestleMania 33 in 3 weeks time?! Is enough being done to hype up Roman Reigns and Undertaker, was the brutal attack on Shane McMahon by AJ Styles too much too soon, will the magic between Triple H and Mick Foley continue, and can even Paul Heyman save the build for Goldberg VS Brock Lesnar?! Lots of questions to be answered as we edge closer to the big show in Orlando.