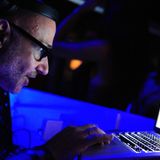 He's more than a dj. Gigi Squillante is dj,producer, art director,radio speaker,vj...He is a creative artist, always in search of new dimensions in order to transmit emotions.
His sound has continuously evolved during his dj career.
In 30 years he plays in many italian and international clubs and as a dj producer realises tracks fo important labels like Sutune, The Dub and Bonzai Records.
In 2006 he founds with his brother, the Dj and producer Naetago, the Anagogy Records, a progressive/techno/house indipendent label.
For years he shares his consolle with a lot of international top djs.
Raised in the midst of the disco music and shaped in the house music explosion we can consider the "electricity of sound" as Gigi Squillante's mainstay.
Gigi Squillante is a dj transverse to music and to himself.Every set has its own personality.