DJ Bobby Viteritti: Where The Boys Are: Tea on the Poop Deck-Spring Break 1977- Fort Lauderdale, FL 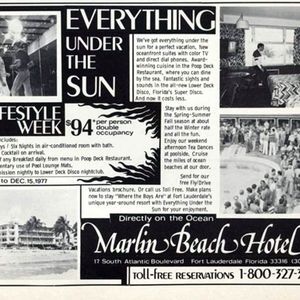 DJ Bobby Viteritti: Where The Boys Are: Tea on the Poop Deck-Spring Break 1977- Fort Lauderdale, FLby Gift Of Song (.org)

Completed in 1952 the Marlin Beach was the jewel of the Beach’s hotels. It had over 105 rooms, a stage and dance area two restaurants, and had a large aquarium type window onto the pool, allowing diners to enjoy their meals while watching the goings-on under the water in the pool. Both the hotel, and the dining room window were featured in the 1960 movie “Where the Boys Are” which established Fort Lauderdale as the place to lay in the sun in the day and party at night. Then in 1972, a group of entrepreneurs spent over $300,000 renovating, reimagining and promoting it as “America’s premier gay resort." History & architecture aside, its main attraction was the genius of DJ Bobby Viteritti and his ability to build a mood on the floor and to keep its full all night long through mixes of unbelievable energy. Bobby always heard sounds in records that none of us heard until he mixed them together and showed us. You'll never forgot how it sounded when he played it. Enjoy!

More from Gift Of Song (.org)