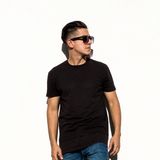 GIAN DEREK, Colombian dj and producer of electronic music, whose formation begins in the year 2013 in "Mix Masters Academy" (The best Dj´s academy of Colombia according to the prizes "Colombian Dance Awards" 2015). Achieved his insertion in the industry through his previous group or duo called WOLFF & BEAT (2014-2017). They were part of the most important festivals and venues in Colombia and Latin America as Summerland 2015 (currently Storyland), Mysticland, Garden Rave (1, 2, and 3), Panama Music Conference, LIT Night Feast, Wonderland, among others; Sharing the stage and also touring with Top 100 artists such as Dimitri Vegas & Like Mike, Steve Aoki, Nicky Romero, Alesso, Bassjackers, W & W, Nervo, Cedric Gervais, Dvbbs, Moska, Cazzette, Jochen Miller, among others. In early 2017 he began his career as GIAN DEREK, releasing an EP with a great musical content, including sounds from Trance, with a very commercial emphasis, with collaborations with the most relevant artists.