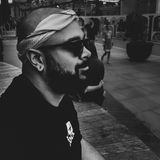 Never miss another
show from GeraH

Geraldo Oliveira (GeraH) is an inquisitive record collector based in London, whose interest to collect records started in his small hometown - Caieiras, Brasil - when he was 9 years old and used to dig through (and scratch) his dad's collection.

Having played at a good deal of underground clubs and parties in São Paulo, he also had a chance to develop his own project called Laca Negra, which tapped into multiple facets of Soul, Jazz, and R&B at different bars, such as Desordem and Jamón Jamón, playing his records in Pinheiros, the most bohemian neighbourhood of São Paulo.
Last year he came up with the idea of linking all collectives and DJs in a radio station that could show the Brazilian music culture gathered in the same inventive and creative website. As a result, in April, he launched Dublab Brazil (Brazilian Branch of the world-famous Los Angeles radio station Dublab) with DJ Zinco and the journalist Monica Herculano.