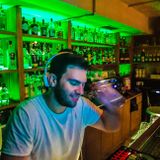 Your Mind & Your Body
by George Boletis

George Boletis was born at 1985 in Gythio,Lakonia-Greece.When he was 13 years old , he realised he was in love with music and he decided to found a hip-hop band with some friends.
His career as a Dj starts at the age of 16 in local bars , while his movement to Athens in 2003 because of his studies there, offers him the opportunity to take part in the nightlife of Athens.
"Hobbit Bar" at Karitsi Square becomes his first step.Then follows "Ivi Bar" at Exarhia region until he is proposed to play in one of the most famous bar-restaurants in Athens named "Big Apple".
During his Two year performance there he becomes able to collaborate with Djs from one of the best radio stations in Greece , BEST 92.6FM.
Later , he worked as a resident Dj in one of the most hot spot bars at summer in Athens ,"Cruiser Exclusive Bar".There He will add at his C.V. collaborations with Djs From the radio station EN LEFKO 87.7FM.
https://www.facebook.com/DjGeorgeBoletis
https://soundcloud.com/daniel-rossi-12