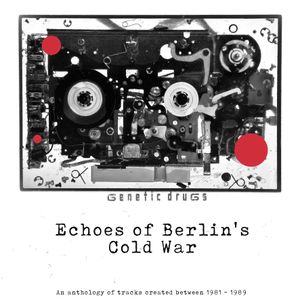 My first demo production entitled 'Some Tracks Before' came out as a cassette in 1981. With a short wave receiver I captured sounds and voices from radio stations all over the world. I was fascinated by the Soviet/American programme of Radio Moscow, East Germany's Radio Berlin International and special frequencies where the East German secret service Stasi (MfS) broadcasted number codes for spies in various languages. These recordings became a source of inspiration for my music, a documentation of obscure voices of the Cold War in Berlin. I used these recordings in my productions, 'Eligio's Hallucinogenetic Plans', 'Genetic Plans' and 'The Mysterious Phenomenon of Human Languages'. With the exception of the title track this mix is a collection tracks I've created between 1981 and 1989. Check for more illegal uploads of my original tapes in poor quality on YouTube.
Genetic druGs
buy:
https://itunes.apple.com/de/album/echoes-berlins-cold-war-anthology-tracks-created-between/1370345398