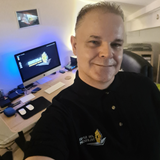 Lex van der Horst (the man behind Gaia-X) was born in Utrecht, The Netherlands in 1970. Since an early age he listened to the weekly Soul Show and of course In The Mix by Ben Liebrand.

After working as a DJ in Spain in 2002 he came to a crossroad. Instead of following his heart, he chose for a more secure career with a better financial perspective. Time passes by, just like life, but his passion for mixing never faded.

Instead of playing for big crowds, he finds his audience with his own trance music. His broad taste for dance music varies between, progressive and uplifting trance. As Gaia-X he tries to share the most important thing: his unconditional love for trance.