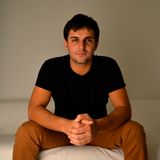 Conceptual at Insomniafm May2016
by Gabriel Floriani

After a sabbatical year away from the dj boot, the Argentinian – Dubai based came back playing for Plus minus, one of the most respected underground
parties in Dubai. He was opening nights for big names like Nick Warren at O2, Ben Klock at level 41 in media one, and Playing at the closing season 2014 in the palm island in Dubai, leaving the crowd in a good mood just for James zabiela to play his first track.
Gabriel took part of the line up at world class venues like Media one at level 41,
Story Rooftop, 360 and Nasimi beach playing along with well known international dj’s such as Henrik Schwarz, Tim Green, Ray Okpara, Chymera and Mario Basanov aka Ten Wells.
At the same time He also participated at the festival ” party in the park” hosted by the prestigious ” whats on ” magazine with artist like Lilly Allen and Richard Ashcroft among others.
All along He has also been hosting a monthly radio show every first Friday of the month with over 3.000 listeners at www.insomniafm.com