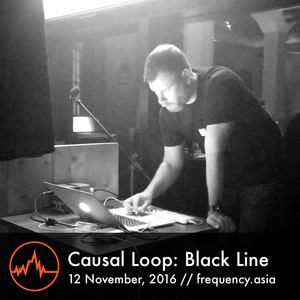 This show was 88th in the global bass chart.

Black Line is DJ and producer originally from the UK who has spent the last nine years living in the UAE. Heavily influenced by years of clubbing, playing jungle, drum & bass and bass music, spending his youth listening to punk, industrial and electronic music, he developed an ear for the nonconformist. Disillusioned with the music being played in clubs, he started to experiment with noise as an instrument. He began to strip away the traditional layers of audio production to reveal a unnerving, provocative and relentless form of experimental music; something that shakes off the constraints of dance music but remains heavily captivating and has the frequencies to damage bass bins on the most powerful sound systems.

Check out the full show notes at http://www.frequency.asia/shows/causal-loop/black-line