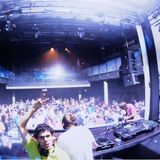 FrankyNuts is a 17 years old Dubstep/Electro Producer and DJ originating from Roosendaal, the Netherlands. He started out through playing drums in various metal bands. Now using software to create his music, mainly using dark heavy basses and distortion yet keeping it progressive.
Franky Nuts is signed at BlackHole Recordings (Tiesto's label). His first official track, Dunugoz Vs. Tha Roofas - Anita's Theme (Come On People)(Franky Nuts Killer Remix), was released on the 15th of August on a remix cd including artists as MRK1, DJ FUNKADELIC etc.
" Franky Nuts approached things from the electro rave side, similar to the sound of the Bloody Beetroots and Steve Oaki."
-Black Hole Recordings
With fellow DJ/Producer Azzeration he arranged the Kill the DJ parties in Roosendaal (De Heksenketel) and later Bergen op Zoom (Gebouw-T). He is also working together with PRSPCT who have a wide range of artists such as Boemklatsch, Nobody Beats the Drums, Black Sun Empire, etc.