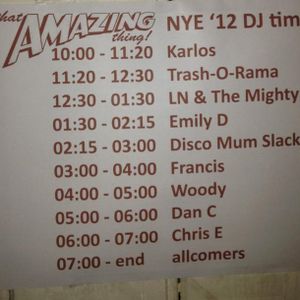 We like houseparties - New Year or anytime! We’re overdue setting up an OTT sound system in someone’s living room & DJing in the whirlwind of tightly packed energy that brings. Come on someone, decide what you really need is a wild party at yours with us DJing!
Living rooms ..... & cellars. I’ve played some brilliant cellar parties over time. Often in Chorlton. Our friend Cormac lived on Brundretts & we had some crackers there. One in 2003 was unbelievable, both for the amount of people in the house & just how good it was. Probably the best house party I’ve ever been to.
If it has a rival that would be among the many parties in Mel, Rachael & Andrea’s E12 cellar. We’re blessed to have such generous friends that would collaborate on a party within their doors, not just once, but several times. We held NYE gatherings there in 2009, 2010 & 2012. 2009 there is my other candidate for “best house party ever”. Here’s a mix of records I played at the 2012 version.

More from That Amazing Thing!