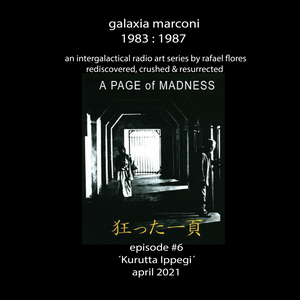 Kurutta Ippeji, a page of madness, is a Japanese horror film that tells the story of a worker in a sinister psychiatric hospital who begins to experience a strange attraction for one of the inmates admitted after murdering her own baby. It was directed in 1926 by Teinosuke Kinugasa, highly influenced by German Expressionism, especially by The Cabinet of Dr. Caligari and the cinema of Murnau, and is based on a story by the Nobel Prize winner Yasunari Kawabata.
In this episode of Galaxia Marconi, what could be a night of terror in that sanatorium is freely recreated, entering it with the sounds of dusk and leaving it with the arrival of dawn.