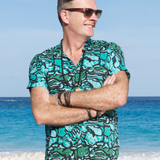 As a Soundtrack Composer, Felix was twice nominated for a Cymru BAFTA award for his BBC documentaries. He has scored over 100 wildlife shows and films for Netflix , the BBC and Discovery channels amongst others.

As a Record Producer he produced 8 albums for Bermuda’s Heather Nova, selling over 2 million records worldwide, and received a Platinum Disc for producing a song on Sean Penn’s ‘I Am Sam’ Motion Picture Soundtrack

As a DJ, Felix co-founded Bermuda’s premier live band ‘The Big Chill’ (Best of Bermuda Award 2016). He also has an house band ‘Milk n’ Money’, famed for their epic pool parties, and just last year he played to 6000 people during Bermuda’s first Pride Festival. He also headlined the main stage as a DJ during the America’s Cup Louis Vuitton event and hosted a daily radio show on Ocean 89 FM for two years. He has been a DJ for over 25 years, and has played 2000 shows in Bermuda alone.