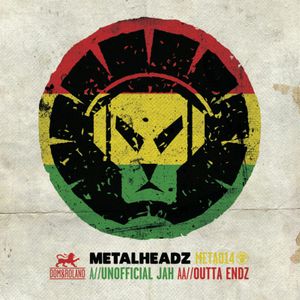 Dom & Roland is dnb producer Dominic Angas. His next EP on Metalheadz is called Unofficial Jah/outta Endz and will be released end of November 2013 and is undoubtedly one of the most eagerly anticipated Metalheadz releases in the label's entire history! This milestone outing sees a long overdue debut release for one of the drum and bass scene's greatest talents D&R. His constant output of critically acclaimed work, over nearly 20years, has contained some of the biggest tracks this genre has ever spawned. Metalheadz proudly present two brand new outstanding examples of his production genius for your listening pleasure. Both sides of this release are already instantly recognisable to most discerning and non-discerning fans and both will no doubt become future classics, just as you might anticipate from Dom's first Metalheadz outing. To finish off the release, the stunning sleeve art fittingly depicts a new take on the classic Metalheadz logo, the lion has awoken! Let Jah be praised!

Incredibly good as always from Dom

great selection. most of the these i hear for the first time. Dom's own stuff simply the great no doubt!

added FULL Tracklisting, now you can buy all the stuff :P

Evil concussion your continue to be a legend for uploading proper business such as this!

thanks lady, will working on the correct Tracklisting asap too :)