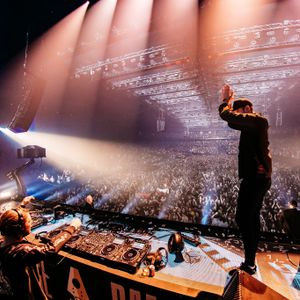 It’s the time of year many people have longed for throughout a miserable European winter - the start of Spring. A season where we begin to get excited about the prospect of sunshine and the upcoming summer schedule as the first festival seeds of the year blossom their long-awaited heads. Kicking off the festival season in Belgium was Rampage - an event quite rightly billed as the biggest drum and bass and dubstep party in the world. But with ‘The Beast From The East’ descending on Europe (and we don’t mean Andy C) it was the wintery weather scenario everyone attending the festival had been dreading.

What can I say about the production? Well…WOW is about all I can manage! Lasers on lasers, tonnes of confetti, loads of CO2, about a million lights, robots, AV screens the lot. Literally another level, almost futuristic. The sound was crystal clear which was crazy in a place that big. So until next time Rampage ;-)

I remember chilling out and chatting to a random Belgian guy who had been to all ten Rampages during this set. He asked me what I thought of Brexit, I said "What do you think I am doing in Europe on the weekend we're supposed to be leaving the EU?" We hugged, we toked, we partied some more.