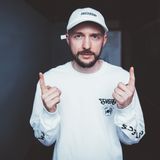 Never miss another
show from ESKEI83

ESKEI83 is one of the best live performance DJs of all time!

With more than 150 shows per year in the hottest clubs and at the biggest festivals,
there’s hardly a day when this “always on the go” DJ-Genius is not behind the decks!
He mixes every single genre, letting their borders blur, not because it is “en vogue”,
but because ESKEI83 covers an incredibly versatile musical spectrum and well, he’s just the best doin it!

Don’t believe it? Well, his references speak for themselves:
First german Red Bull Thre3style Champion, Splash! Festival, Rock am Ring,
and Red Bull Most Wanted DJ. In addition to being a 8-fold DJ battle winner,
ESKEI83 has a packed calendar of international bookings from the U.S., Europe and Asia.