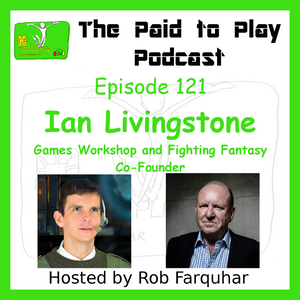 Ian also co-authored The Warlock of Firetop Mountain, the first interactive book in the Fighting Fantasy series, with Steve Jackson in 1982. Since, the series has sold 20 million copies worldwide. Ian has written 15 titles in the series, including Deathtrap Dungeon and City of Thieves. His new book, The Port of Peril, will be published by Scholastic in August 2017.

In 1995 Ian oversaw a merger that created Eidos plc where he served as Executive Chairman until 2002, and later as Creative Director. At Eidos he launched global video games franchises including Lara Croft: Tomb Raider.

More from Episodes – The Paid to Play Po