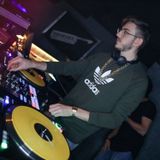 Never miss another
show from EMBEE3

EMBEE3, formerly known as Embee Classic, has been thrilling the party crowd throughout several years as a hip hop & open format DJ. From Munich to Berlin he demonstrates his talent to the audience and shows off scratches, juggles and own remixes. A creative mix of the different genres of hip hop music, as well as a perfect feeling for the dancefloor have already set many clubs on fire. As a tour DJ for a Berlin Hip Hop label and support for a French rap duo, he can also be seen on the stages of several festivals.