A Soundtrack For Street Artists 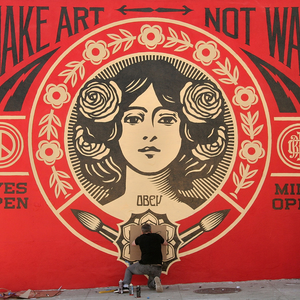 Graffiti as an artform dates back to our prehistoric existence, when early man would scrawl images on the walls of caves as an instinctual urge of self expression. In more recent years the practice has presented a range of credibility from vandalism to high art, but even with the former it represents a necessary rebellion against a modern landscape dominated by billboards, corporate logos, and overtly functional architecture.

Having just completed the celebration of street art embodied by the Vancouver Mural Festival, this selection is comprised of highlights from a set I played in support of Shepard Fairey’s headlining exhibition of the festival, and represents my attempt to distill the influences of an artist whose musical influences are as integral to his process as paint. In that spirit, the resulting mix of politically and youth angst tinged hip hop and punk is dedicated to anyone who has ever had to run from the cops for the supposed crime of being an artist.