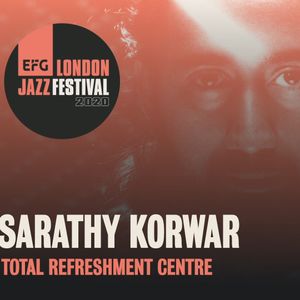 Tabla player and percussionist Sarathy Korwar in a special performance from Total Refreshment Centre. Born in the US and growing up in Ahmedabad and Chennai in India before moving to London, Sarathy has established himself as one of the most original and compelling voices in the UK jazz scene.

In just four years he has amassed an incredibly impressive discography, first releasing his debut album Day to Day in 2016 on Ninja Tune, followed by a triple live album My East Is Your West with the UPAJ Collective on Gearbox in 2018.

He released his sprawling second studio album More Arriving, on the Leaf Label, featuring collaborations with rappers from Mumbai and New Delhi – which won the AIM Independent Music Award for best independent album – and he has just released a special collaborative album Equinox with The Comet is Coming’s Danalogue this year, with a new solo album to come in 2021.