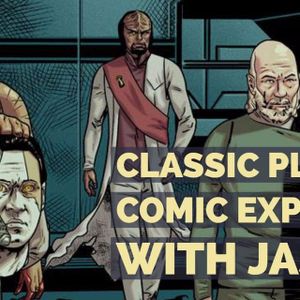 Our final interview is with artist/colorist Jason Lewis! For nearly 10 years Jason has been coloring comics from Marvel to Image, DC to IDW. After the recorded interview, Jason and I continued the conversation about how he worked into the ranks as a colorist. I feel it's worth noting that there was a bit of downplaying the amount of work and networking Jason did in the beginning to put himself out there and land the gigs he's received, and it was in no small part that his tenacity and work ethic helped him get to where he is. Instead of attempting to livestream this year's Classic Plastic Toy & Comic Expo, Rem decided to hit up a few tables and bother people for interviews! Pay close attention, kids. He's really terrible at this, but had some great interviews! Listen to the audio above and read the transcript lovingly produced by Brandon! (The transcript is on the way! Jason talks fast and with purpose, but I wanted to make sure the audio posted today! I'm hoping to update the post wit