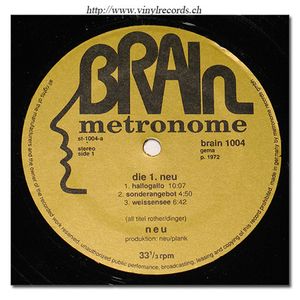 The Michael Rother tracks are from Katzenmusik, my favorite of his records, featuring Jaki Liebezeit on drums and Conny Plank in the control room.

Günter Schickert is ridiculously unknown and underrated. This is from his fantastic second record, Uberfällig.

The Popol Vuh cut is an atypically rocking track from the Nosferatu soundtrack, but if I know them it's on a couple of other releases too.

I like Kraftwerk fine, but I've never really liked Autobahn that much. I put the whole thing on for instructive purposes, but it really doesn't sustain interest over 20 minutes (as say Klaus Schulze would).

the bass and drums for 'future days' ripped by bauhaus for bela lagosi;

cheers duck - where you teach ?

Hi Mack, good guess! I don't know when the tracks were recorded, but "Geradewohl" was released on 1980's "Selbstportrait III". "Veilchenwurzeln" is from "Wenn Der Südwind Weht" (1981), also on Sky Records. My favorite of his records though would have to be "Selbstportrait II" so be sure to check that one out also.

it sounds very similar to 'Geradewohl' - also by Roedelius - same year I guess ?

Sorry, I should have replied directly instead of in a separate comment. See above.

that roedelius Veilchenwurzeln song ?- which album is it on pls ?

thx for the nice mix