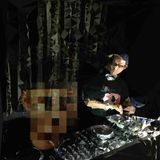 Never miss another
show from dubstronica

dubstronica is a Japanese DJ who started playing around 2000. At his early career, he played IDM at a regular party "allclear". Then he started live streaming with Ustream from 2007. His unique style that communicate to the listeners via IRC chat during his DJ play was accepted by many people and there are many followers now. Played in various style at "Ke" in Osaka, "Flying Potato" in Nagoya, "ketsu", "nenumi", "Furo to Ongaku" in Tokyo, now he is a regular DJ at "SUGODJs" at MOGRA, Akihabara, Tokyo and "NURUMAYU" at Orbit, Sangenjaya, Tokyo.

As a member of GORGE.IN, he played for Gorge special program at Dommune, the biggest online music streaming channel in Japan, in April and May, 2013. And in July, his Gorge mix (Gorge DJ mixes are called "OnePush") made so many people crazy at "FREEDOMMUNE 0＜ZERO＞ ONE THOUSAND 2013", one of the biggest music festivals in Tokyo.