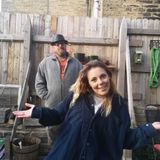 TLD002 'Eight Out Of Ten' Tracks
by Doug Lyon

TLD003 What The Funk
by Doug Lyon

TLD004 Getting Ready, To Stay In
by Doug Lyon