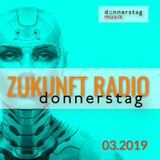 Never miss another
show from donnerstag

“donnerstag will be headlining all over the world within the next 3 years. Period.”
— Phil E, former Resident DJ, Ministry of Sound, London

In 2015, donnerstag moved to the musically rich city of Philadelphia and within two years he has played almost every major venue and party in the city, has held numerous residencies, has appeared at multiple festivals, entertained three continents, toured Europe 3 times, and in the 2017 summer season in Ibiza, Spain with a 3 week, 20 gig romp, a dream come true for any DJ.

In September of 2018 donnerstag released "Darkness" and Beatport hailed his track one of the "BEST NEW MELODIC TECHNO" tracks entering the chart at #11 on the last day of the month alongside of HOSH, Yotto and Kollektiv Turmstrasse. The second track on that EP "HAL2018" charted on Spotify at #30 on the AMPsuite playlist which includes the entire Drumcode roster.