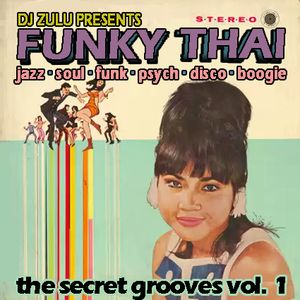 The thais, being essentially happy and warm-hearted ppl livin under a permanent tropical climate, recorded straight-forward club music (specially many good surf & psych rock 45's) for their own pleasure according to their taste, emphasizin on uptempo beats & sometimes containin poweful basslines, wah wah guitars or fat horn sections, tryin to emulate the western funky bands but keeping a very genuine flavour. Musically speakin, some soul, disco & boogie tunes included here, could be instant hits in the brit or euro rare groove scene (if its lyrics were in english, of course). Besides all that, is funny to think that, although extreme cultural, political and musical differences between the two worlds (east & west, specially during the 70's!) the thais were still able to enjoy these sounds.
Enjoy these rarities as much as i did by diggin and playin them! Start this fantastic music journey to a dream land with spicy & delicious food, hypnotic landscapes and beautiful people!

could you please give the title and singer of the BT express cover Do it? thank you