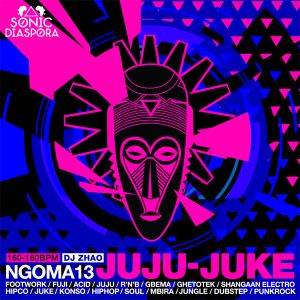 Since drums were banned on most of the N.Amerian slave plantations during the 1600s, after the masters discovering that the slaves organized revolts with talking drums, the expression of poly-rhythms in Afro N.American music has primarily been through use of the voice. Thus US music became typified by the simple 1-2 “dupple” rhythm, in contrast to complex beat patterns in S.America or the Caribbean.

Now in the 21st Century a renewed sense of rhythmic complexity returns to N.America dance music in the form of Juke/Footwork in Chicago.

One of the Best mix of Juke so far! Hail from indonesia!

cheers Onaci! but "Telepopmusik"? which one is that?

Love this mix! That Telepopmusik remix is INSANE!!! I'll def be sharing it with di people :)

always such a wonderful experience to listen to your mixes