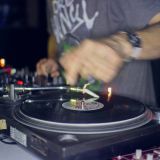 First played on the party in year 2000. Deeply in acid and hard techno in those times than he had moved to hardtek and tribe sounds. In 2007 got heavly influenced by breakcore sound. Today he plays breakcore, chiptune, jungle and crossbreed sets. Had performed on many club, squat and free parties in Poland and abroad with top underground scene stars. In early 2000s was one of the founders of Tekno Kolektyw sound system in Toruń, than Autonoma sound system in Wroclaw. Had created C_P_P after. Today he is involved in Pixel Gigs events, promoting breakcore / chip tune sounds. Plays from vinyls.