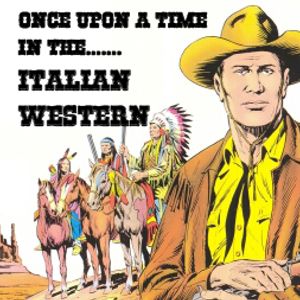 Spaghetti Western, also known as Italo-Western, is a nickname for a broad sub-genre of Western film that emerged in the mid-1960s, so named because most were produced and directed by Italians. The films were shot in inexpensive locales resembling the American Southwest, primarily in central and southern Italy. Leone's Dollars Trilogy (1964–1967) was neither the entirety nor the beginning of the "spaghetti Western" cycle in Italy, but for Americans Leone's films represented the true beginning of the Italian invasion of their privileged cultural form.Ennio Morricone (with Franco Micalizzi, Luis Bacalov, Bruno Nicolai and many others)reinvented western movie music . He discarded the symphonic and the noble (lush strings and brass) and brought in the folkloric and the grotesque.: whistling, choral shouting, dissonant harmonica, lonesome trumpet, Jew's harp, ocarina, chimes.It was a sonic revolution that enabled director Sergio Leone to transform the western's visuals and script.

so glad i found this... close your eyes & enjoy!

I absolutely love this!

i love this. inspiring.

cool! nice to hear not only morricone tunes