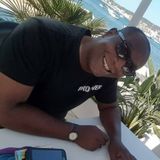 International & Ibiza Resident dj / Producer.
Toni alternates his time in London, Ibiza,
Switzerland and Australia. He is well known for his unique style and love of music.
Toni can motivate people of all ages to dance and groove, hence his nickname GROOVEMASTER !!
Since toni moved to London from his native country of Lagos, Nigeria
at the age of 6 yrs, he has studied and worked hard to reach
his goal. In 1993 he moved to Australia and dj'd at various clubs & parties.
After so many years in Australia toni took a big step forward and moved to Ibiza and has been his home for the last 21 yrs.
Toni is well established in Ibiza and has played in major
venues on the island, including Pacha , Ushuaia. Amnesia, Space, Underground Ibiza.
He was the Resident dj at the well known Sunset Ashram in
cala conta Ibiza for 14 yrs and also has winter Residencey
in Switzerland.
FOR CLUB & PARTY BOOKINGS - +44 7384122207 +34 602 588 712. Email djtonifrench@gmail.com