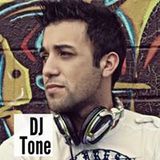 About DJ TONE:
Born in Honolulu, Hawaii and with the direction of his father, DJ Tone started out DJing at the age of 14 with a high energy sound of Hip Hop/Rap & more. By the age of 16 he had found a new love of music (Dance/Latin/House/Remixes). This had opened his eyes to new opportunities of recording and producing, with influences by many well known Dj’s.
Dj Tone jumped into the night-life scene at the age of 21 in downtown Houston, TX delivering a variety selection of music for people to feel and dance to.
Always looking for something different, Dj Tone sets his sights on entertaining the crowd by giving his signature performance by presenting himself in a mirror head-piece/helmet, bringing more energy and enthusiasm for the night.
Voted Best MidWest Dj by LMX Dj Choice Awards 2014
Voted #1 Texas Dj by People en Espanol Magazin 2013
Voted #1 Club Dj in San Antonio Texas for 2013 & 2012.
Voted Hottest Male Dj in San Antonio 2013
Official Dj for San Antonio Scorpions FC
Oficial Dj