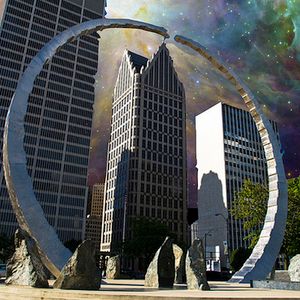 DEMF is the best -- going out there is literally the one thing I look forward to the most every year, and i'm pretty sure it wasn't since I started going every year that Detroit techno finally clicked for me (I had listened to mixes from guys like Kevin Saunderson and Ken Ishii as a kid, but at the time I think I was so focused on breakbeats and stony downtempo stuff that it never made a real impact...so it took me about 10 years to come to the realization that Carl Craig is pretty much the greatest to ever do it).

anyhow, so these are mostly from Detroit artists -- any other tracks are from producers who were heavily influenced by the city's signature sound as established in the mid to late 80's to about halfway through the 90's, which is when the majority of these tracks were originally released. either way, the vibe is intact all the way through, and i'd say this is probably the best mix i've done so far this year...so yeah, hopefully it gets you fired up fer the weekend!