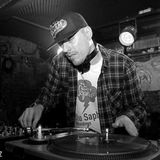 Engulfed by music since he was a young child, Jay Rome immediately began learning various types of instruments including guitar, drums and piano.
But the times took a drastic turn upon the discovery of drum 'n bass as he made his way through school in 1995. After meeting schoolmate, DJ Mark-E, Jay Rome began to experiment with production techniques while being guided by his mentor.

His Labels on Blu Saphir Music Group has had a lot of success since its genesis in 2005. The labels has gotten major support from many well-known artists as well as the worldwide drum 'n bass collective.