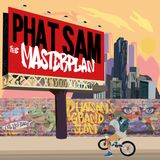 Never miss another
show from djphatsam

THE MASTERPLAN part 2
by djphatsam

I've been DJing since 1999, playing mainly hiphop, R&B, reggae and reggae dancehall. I've done a lot of DJing around the U.K., mainly in London, Oxford, Birmingham and Liverpool. Looking to branch out worldwide in 2012.

Recently I've been more renowned for my mixtapes, where Phat Sam brings the King Music! I've released over 100 mixtapes over the years. I was also on BBC Radio 1Xtra late in 2011, which was a good look.