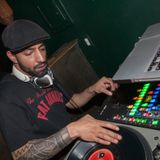 DJ Noumenon (Noms) has dedicated the greater part of his life to the DJ world; teaching, consulting and selling, all while currently working as an active DJ artist in New York City. Over the past 9 years, Noms has educated over 8,000 students at the world famous Scratch DJ Academy, while perfecting his craft. He has been featured in numerous television shows and national media outlets, including Fuse TV, Spike TV, MTV, and Forbes, among others. He was featured on the 2009 hip-hop documentary, “The Elements,” along side artists DJ Excess, Rob Swift, and GrandWizzard Theodore. He has spun at major venues throughout NYC, and has shared stage time with artists such as Questlove, Mark and Samantha Ronson, MF Doom, Pete Rock, DJ Qbert, Little Brother, and Dave Chapelle, just to name a few.