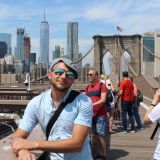 DJ Minty/Dave Angello is a dance music Club and Radio DJ. He is also an occasional actor, making appearances in some short films. His experience doesn't only stop at his DJ sets, He also produces his own tracks and using them at his gigs when ever possible. Starting in 2004 on Fm radio station in Leicester "Vision Fm", had his own show called "Mintys Selection", on Saturday night's showcasing the best new music in the Dance scene. In 2007 he brought the show to three more stations in the UK that were Internet based. He has been a club and bar DJ since the age of 16.

Pete Tong as his influence and idol, he has leaned a lot since starting out in 2001.

You could definitely say its WELCOME TO THE WEEKEND!