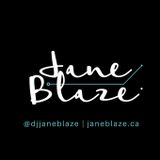 Support Jane Blaze by subscribing directly to this channel and get access to exclusive rewards.

FKA Dj She
~
www.janeblaze.ca
This East Coast native is a heavy hitter on the DJ scene. Her credentials read like a laundry list of formal accomplishments. The former manager of Canada’s number-one record store, Beatstreet Records, and former host and creative director of Vancouver-based Grounded TV; the promoter and founder of Jane Blaze Productions; formerly known as DJ She, battling as Canada’s first female DJ to compete in the worldwide Red Bull Thre3Style competition.

She has been chalked up alongside some of the world’s most credible DJs and artists, including Stretch Armstrong, Cut Chemist, DJ Ayers, Kool DJ Red Alert, Queen Latifah, Lauryn Hill, Sharon Jones and Montell Jordan, while her corporate client list is a mile long with brands like Armani, H&M, Jimmy Choo, Honda, Artizia, Nike and Red Bull.