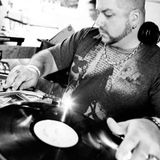 Never miss another
show from djflex585

Flex live at Sonar DnB Tuedays at PLUSH in Austin, Texas
by djflex585

Get Funky with Flex 9 part II
by djflex585

Get Funky with Flex 9 part I
by djflex585

GET FUNKY WITH FLEX
by djflex585

Recently with all the new productions that Flex has been working on
If you see anything done by Spencer Harris this is also Flex.

Flex began learning his skills back in 1988, thanks to his schoolmate at Brooklyn Tech, John Nanas. In 1989 Flex moved to Rochester, NY which would become his new hometown and in time Flex would turn out to be one of the most well known and respected DJ's in this new hometown.

He has played all over Canada and the United States and appeared on Various TV shows including Video Hits and Electric Circus.

Flex has an eclectic taste of music but whatever he plays, it's always going to make you move.