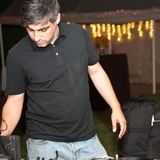 After a weekend in 1993 that started with a party hosted by Cinnamon Twist of Tribal Donut at Marilyn Ferguson's mansion in LA and ended with one of the legendary Wicked Full Moon massives, Luke purchased his first record as a DJ - Freaky Chakra's Halucifuge. It was on from there.

In 1995 he started a soundsystem with DJ Brother called Spaceship Gaia and was one of the founding DJs of the legendary 13moontribe parties in Santa Cruz.

The list of DJs and performers he has played with would need its own website - but how many people can say they have shared a bill with both Robert Anton Wilson and the Sugarhill Gang?

On the web at http://www.frigidigits.net