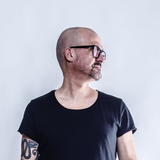 Carlos Manaca is one of the main Portuguese DJs and Producers. Being inside a Dj booth since 1986, his perspective is still the same: entertain people as much as he can, while having fun for doing what he likes the most: DJying!

Being resident of two of the main Clubs in Portugal during the 90’s (CAIS 447 – Oporto, ROCK’s Club - Vila Nova Gaia) and playing in the biggest Dance Music events in Portugal, gave him recognition as one of the main DJs on the Portuguese Dance Scene.
Based in Madrid since 2002, his DJ schedule is mostly in Portugal, but he still has time to play regularly in Countries like Japan, Switzerland, Brazil, Luxemburg, Poland, Croatia, Germany, Mexico, Russia, UK, USA and Spain, where he plays since 1993.